BACK
From the land to the body: forms of violence and discrimination against Indigenous Women 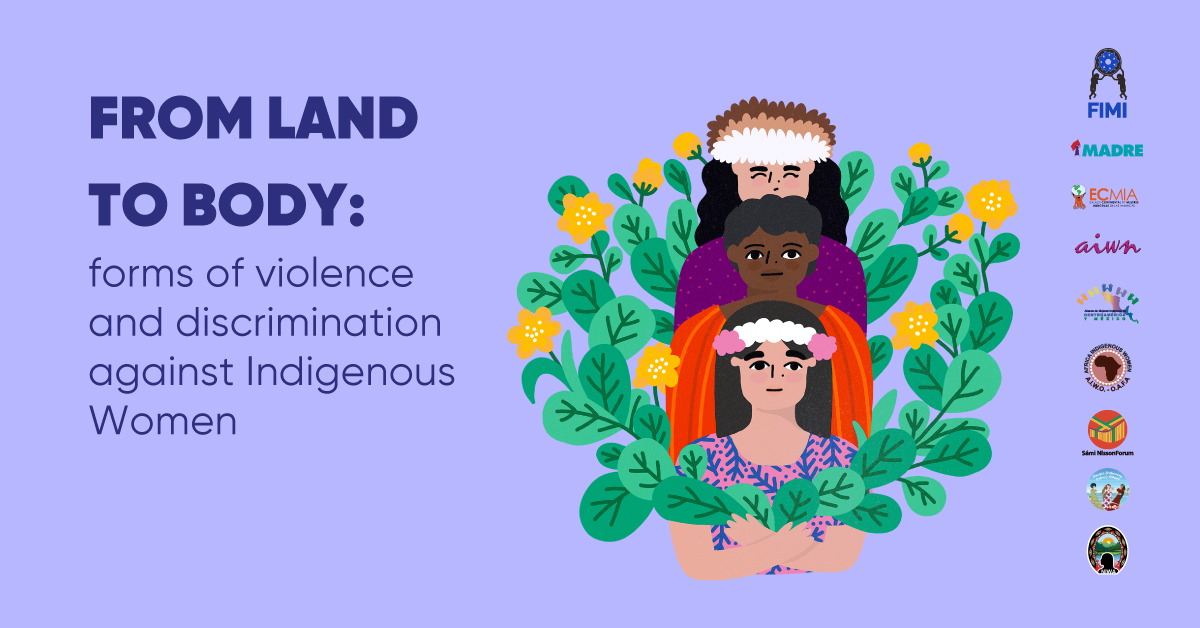 Indigenous Women face diverse forms of violence arising from the dispossession and breakdown of the social bond of their communities. The solution provided by the CEDAW General Recommendation on the Rights of Indigenous Women and Girls is holistic, crosscutting and intersectional.

It took Helena Steenkamp ten years to gather the courage and admit that she had been raped in her community. Her abuser was an outsider to the community who used to come for work and he was only prosecuted after 6 years. In the ‡Khomani San Indigenous community —which inhabits the Kalahari Desert land located on the border between South Africa and Botswana—, the case of Helena is not the exception but the rule. Social decomposition, caused by constant displacements and years of exploitation of ancestral land, has created a context of violence that has a particular impact on the bodies of Indigenous Women and Girls. San women face discrimination and violence both within and outside of their communities, carried out by those who want them to be weak and quiet. But if the perpetrator is inside and outside the home, how can a woman protect herself?

Within the communities, fear to publicly admit to having been sexually abused and fear of losing their husband’s support, dissuade women from reporting the case to the authorities. “Being able to talk about it requires having an introspection process and building up courage,” Helena says, “it took me a long time to be myself again and regain confidence.” Steenkamp managed to get over it thanks to the strength she acquired from lifting up her community and having to impose herself in a space dominated by men. “If women do not take the lead, we will not see any change or progress,” she concludes.

The CEDAW General Recommendation on the Rights of Indigenous Women and Girls provides a legal framework that may serve as a shield in the face of the State’s inaction, as in the case of South Africa. However, Helena Steenkamp acknowledges that women need first to be empowered, know their rights and learn how to use these international instruments to create a real change that puts an end to discrimination and violence against Indigenous Women.

The San People: a story of territorial and cultural dispossession

The San People, which Helena belongs to, descend from ancestral hunter-gatherer communities considered to be the first ones who inhabited the southern tip of the African continent, also called Bushmen. Due to the migration of other peoples, such as the Khoekhoe or the Bantu, the San People were expelled to the more remote and desert areas, although there was also some mixing among the different communities.

Colonization brought dispossession of lands that were the home of the San and the exploitation of natural resources on which these people relied for its subsistence. This increased competition and rivalry among the Indigenous communities themselves and destroyed the social fabric, livelihoods and cultural identity of the San People. Only a few communities survived, which pushed the San People to be on the verge of extermination.

Acts of violence are wounds from the past

Nowadays, the San communities have lost their original names and there are only five persons who speak the N|u ancestral language. Helena Steenkamp went looking for them in the Lost Tongues documentary. In 1999, the ‡Khomani San reclaimed part of the land that was taken from them thanks to a long process of struggle and to the new legal framework of the post-apartheid government. However, the return of the territory did not bring about the change that everyone was longing for.

“At first, we were all excited to have got our ancestral land back again. I left my job in Cape Town to come here, to Andriesvale, and create change in my community. But in the past ten years, everything has worsened. Without the knowledge on how to handle the land, we did not know what to do with it,” Helena says. With high rates of unemployment and low levels of education, and without the required capabilities to generate new economic activities, many persons in the community fell into substance abuse. There are even some who remember the apartheid as being good years, where there was employment at the farms of the whites and parents could take their children to school.

Helena grew up among parents who fought constantly, heavy alcohol and drug consumption, and girlfriends with early pregnancies. This violence cycle is reproduced generation after generation. In order to overcome this narrative of discouragement, Steenkamp and other community members created a visual project that intends to revert the paternalist and colonialist representation of Indigenous communities. With the advice of the Market Photo Workshop, she photographed young pregnant women. “The girls and mothers had a very positive reaction, something I was not expecting. Our community is always seen from the outside. We constantly receive people who come to investigate us and take pictures of us. For the first time, the story was told by someone from the inside,” she explains.

The representation of Indigenous communities as a form of violence

The dispossession of the Indigenous communities’ identity has been historically accompanied by images that demonize, dehumanize or exoticize them. Indigenous women of the Caribbean are probably the most hypersexualized female bodies in history. At present, countries devoted to the Catholic religion —inherited from the missionary colonialism— forbid women to abort even in cases of malformation or health risks for the mother; while the most popular songs on the radio objectify and sexualize women.

“The hypersexualization of the Taíno Woman is an offense that threatens our lives,” strongly states Tai Pelli, an Indigenous woman leader of Taíno of Borikén, the original name of the island of Puerto Rico. “They take symbols that are sacred to us and use them in a vulgar manner, in a message that perpetuates the image of Caribbean women as instruments of pleasure who may be abused”, she reiterates with a claiming passion and energy that inspires not to take any step back.

Colonization put an end to the matrilineal structure of Taíno Peoples, which granted women a position of respect and equality between genders. “Now women are taking the lead again,” Tai adds, and she points out the global spaces that are being created to promote gender equality. “But in order to achieve it we must take our voices there, go back to our Indigenous roots and values and create a model that renders the other one obsolete,” she concludes.

Unlike the San People, the Taíno Communities dispersed across the Lesser and Greater Antilles have not been able to reclaim the land and territory that were taken away from them by different imperialist States. Puerto Rico is one of the most emblematic cases, as it continues being an unincorporated territory of the United States. “We are the people with more experience in being colonized, but that does not mean that we have abandoned our connection to the land,” Tai warns. Some say that Indigenous Peoples are nothing without land. Although it is true that land is the basis of Indigenous identity —and its expropriation causes a great deal of violence that has a profound impact on Indigenous Women and Girls—, Tai Pelli defends the community identity and organization even when there is no land of their own to set foot on. “Even if we do not have it, we continue loving and defending it from the violence it suffers. Such responsibility must be awakened; we are the earth!” she concludes. Indeed, the CEDAW General Recommendation on the Rights of Indigenous Women and Girls takes into account such intersectionality of violence from the land to the body, in order to end it.