BACK
Confronted with multiple acts of violence, Indigenous Women fight for their lives, their culture and land sovereignty 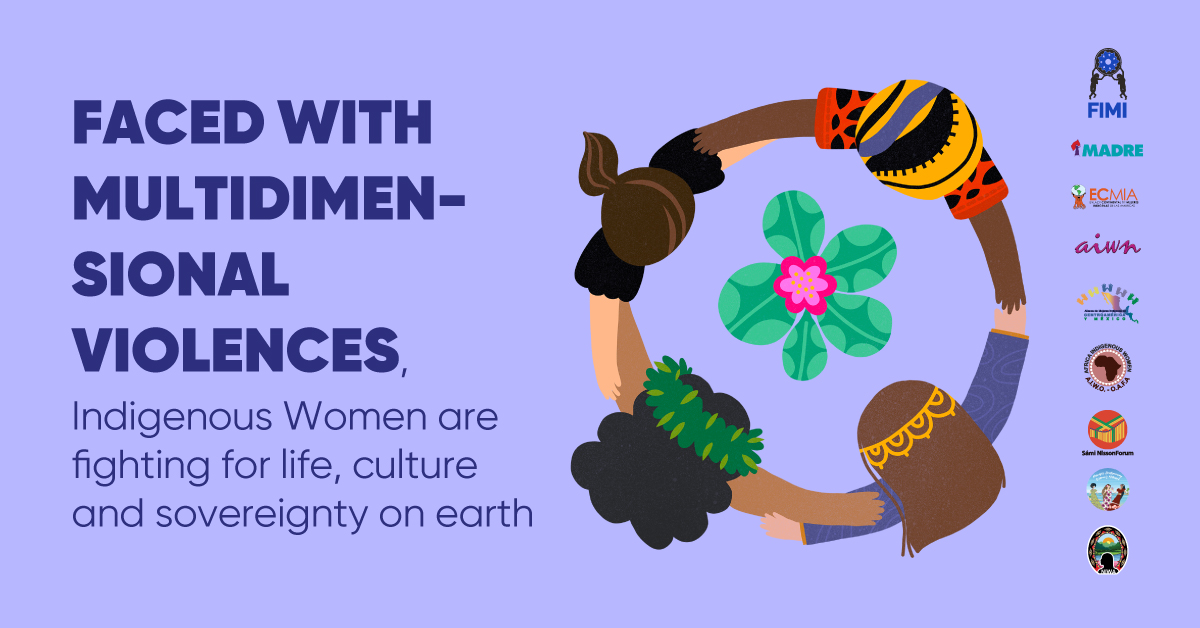 Although the UN recognizes the right to self-determination of Indigenous Peoples, the States systematically infringe it. The CEDAW General Recommendation on the Rights of Indigenous Women and Girls may become the binding instrument that obliged the States to respect such rights.

Aida Quilcué —Indigenous woman leader of the Nasa People and senator of the Republic of Colombia— woke up on the morning of March 15, 2022 with a grieving heart for sad news. Her comrade in arms Miller Correa, counselor of the Association of Indigenous Councils of Northern Cauca, a political and social organization that gathers Indigenous communities of such region, which is located in Southern Colombia, was murdered. “They have been killing us and continuing to kill us. It is part of the millenary dispossession, exclusion and cultural extermination we suffer as Indigenous Peoples. Hence the need to defend ourselves and build self-governance processes that, to date, keep us within the survival framework,” Quilcué comments with the voice tone and serene gaze of someone who carries inside of her the suffering of an entire people.

On the other side of the Pacific, in Guam —the largest island of Micronesia—, Terilynn Francisco represents the living memory of her Chamorro grandfathers and grandmothers. They survived the Spanish occupation, Second World War, the Japanese concentration camps and the reconquest by the United States, which continues controlling the island. “We have an intergenerational trauma, as our communities have been exposed to so much violence and our land has seen too many wars. We need to reclaim our cultural identity and traditional practices in order to understand who we are and who we want to be,” Terilynne Francisco emphasizes, with the sweet and compelling voice of a young spirit who longs for change.

Indigenous Peoples have the right to self-determination, whereby they may autonomously choose their political condition as a collective, their cultural identity and their forms of economic and social development by means of their own institutions. However, many times the States violate such right recognized in the United Nations Declaration on the Rights of Indigenous Peoples. Such violations range from preventing a girl to be named with an Indigenous name, hindering the development of intercultural health or educational systems, encroaching on Indigenous lands recognized by law or failing to comply with the right to free, prior, and informed consent.

With the intention of putting an end to these violations to the Indigenous Peoples’ rights and actively participating in the political and social development of their communities, Indigenous Women all over the world are contributing to the drafting of a specific CEDAW General Recommendation for Indigenous Women and Girls, that may be used as a binding instrument for the States to respect the right to self-determination, among other rights.

Guam: a people deprived of its collective power and identity

“We were one of the first Indigenous Peoples to be colonized and one of the few that is still occupied. For centuries, we have been caught in the authority dynamics of colonial powers,” explains Terilynn Francisco, member and founder of the Chamorro Hagan Famalåo’an Guåhan women association. The island of Guam has been  under the control of the United States as an unincorporated territory since 1950. Guam is also one of the 17 non-self-governing territories supervised by the UN Special Committee on Decolonization. Its inhabitants —although being considered as United States citizens— may not vote at federal elections, nor have access to state social security, nor decide their own future as a people. “We are second-class citizens,” Teri concludes.

The United States maintains the occupation of the island mainly due to its strategic military position in the Pacific and Southeast Asia. One-third of the ancestral lands of the Chamorro People has been occupied by military bases, in violation of the prior consent and without the families receiving any compensation whatsoever. Meanwhile, the military presence of the United States continues to increase. “Our land and our people are paying a very heavy price,” acknowledges Teri, who is also a social worker and mental health professional at the Mariana Islands.

Teri relates this structural violence to the high rates of gender-based violence, suicides and substance abuse in the communities of the Chamorro People. “Colonization put an end to our healing practices and ways to relate to one another. We are a people deprived of power and collective identity,” she says sadly.

In 2011, the Chamorro People of Guam wanted to hold a non-binding plebiscite to explore its political future as a people. However, after a legal process that has lasted ten years, the plebiscite was rejected by a local court in Guam and by the U.S. Supreme Court, with the excuse that it would be discriminatory for the non-Indigenous population who could not vote. “We are not even allowed to have a dialogue with ourselves,” Teri complains.

After this debacle against the Chamorro People, Teri and her fellow women are committed to restoring the collective identity and reclaiming the traditional healing practices of the Chamorro People. “We, Indigenous Women, are the caregivers of our families and we need to take leadership to be empowered again as a people,” she affirms. Teri believes that, even though the U.S. has not ratified the CEDAW and, therefore, the General Recommendation on the Rights of Indigenous Women and Girls will not be binding, it may serve to forge alliances and increase international pressure so that the U.S. recognizes the right to self-determination of the Chamorro People in Guam.

Colombia: a State that recognizes but fails to respect

“In Colombia, the norm has never been respected. First, we had to conquer our rights, because rights are not given, but fought for and demanded. And now, for them to be enforced, we must continue to mobilize, as war persists,” explains the Colombian senator Aida Quilcué.

Although the 1991 Colombian Political Constitution recognizes the right to self-determination of Indigenous Peoples, the Colombian State has systematically violated such right, even in a post-conflict context. After 50 years of civil war and the execution of the Peace Agreements in 2016, the Cauca Department, the second region with more Indigenous population, has not seen peace yet. As it is a strategic passage for drugs and natural resource area, this region continues suffering high levels of violence, particularly against the Indigenous communities that protect the territory.

According to the Indepaz report, in 2021, 171 leader men and women were exterminated in Colombia, of which 55 were Indigenous and 31 were murdered in Cauca. This trend has been on the rise since 2017, one year after the agreements were signed. In 2020, for the second year in a row, Colombia was the most dangerous country for defending Human Rights.

In this regard, the only effective solution for Quilcué is to reconfigure the system from the inside. Although she recognizes that the CEDAW General Recommendation may force the Colombian State to respect such rights, “we need to change the government in order to change the forms,” she concludes. “And that is precisely what we are doing,” she clarifies.

Quilcué became a senator after a process that was devised for years, but that culminated in April 2021 with an unprecedented social outburst and national strike for “the right to life”. The mobilization went from the streets to the polls thanks to an alliance among the Indigenous Peoples and other communities that have been historically excluded. “That is why they are killing us, because we fight for the country to wake up and move forward,” Aida Quilcué concludes.